Miller, Miller & Canby congratulates its attorneys, Jody Kline and James Thompson, who have each been selected for inclusion in the 2016...read more →

Guessing whether Governor Hogan will decide to proceed with the Purple Line Project is becoming quite a parlor game for interested parties. Shortly...read more → 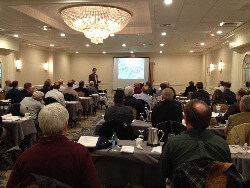 Joe Suntum  was among a panel of the Maryland’s top attorneys who presented to a full house for HalfMoon Education, Inc.’s CLE Legal Issues...read more →

Governor Hogan briefed legislators on his budget today. He stated that money to keep the two projects moving forward is included in his budget, but...read more →

Governor-elect Hogan is still keeping his counsel concerning the fate of the Purple and Red Lines confidential. He has repeatedly stated that he...read more →

The Maryland Transit Administration (MTA) has announced that it has extended the period for the four chosen concessionaires to submit their bids for...read more →